A film crew is working in Terranova’s Supermarket.  It is not a news crew but a real film crew.  No one has been murdered.  This probably has something to do with a movie.

Terranova’s Supermarket could be a set for a television show but it would have to be for a regular series and the Terranova family doesn’t have time for that.  The Terranova family has a supermarket to run.  Terranova’s Supermarket has been a New Orleans institution since 1926.  Still in the same family, and staffed by them, too.  They are a family of professional grocers.  Except for the black sheep of the family who is a speech therapist, I believe.  She has a voice like an angel.  I told her that the day I met her.

I stop in at Terranova’s Supermarket every day for something or other.  It’s on my rounds. The fabric of a New Orleans day has a very special texture.

I cannot imagine the Terranovas hiring someone to shoot a professional video commercial.  I don’t think they advertise at all.  Word of mouth takes care of itself.  Everyone knows they make the best head cheese in New Orleans.

I’m surprised Jennifer didn’t mention that the store would be closed today for filming. She usually keeps everyone informed about what’s going on at the store.  That’s why Terranova’s Supermarket doesn’t need social media.  Its customers don’t need it.  I was there yesterday and she didn’t say anything.  We probably got to talking about something else, as we tend to do, and she forgot to mention it.  It’s okay.  I still have half a roll of Sweet Tarts in my breast pocket for an emergency.

I am your humble narrator.  Life is what you make it.

The only reason I know there is a film crew at Terranova’s Supermarket today is because I am reading the Wall Street Journal  over a carafe of sangria at Santa Fe, the Creole Southwestern restaurant with outdoor seating across the street.  I am watching the world go by.  We are on Esplanade Avenue in New Orleans, Louisiana, USA.  Where else could we be.

Ever your man-in-New Orleans, your special agent in the field, I noticed all the hubbub outside Terranova’s Supermarket so I decided to stop to figure out what was going on.

Emily told me to sit where I wanted.  I did so, directly across the street from the main entrance of Terranova’s Supermarket.

A guy wearing a pork pie hat sat in front of me to partially obstruct my view. 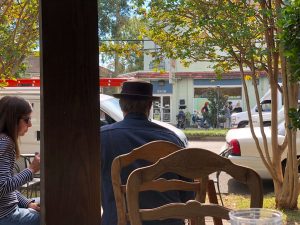 Happily for me he was eating soup so he would bend down from time to time to sip a spoonful and give me a clearer view of the proceedings. 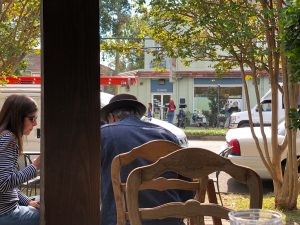 Even after he left my view was mostly of people standing around talking. 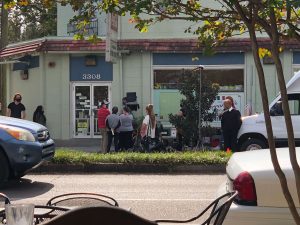 Then, they would walk around a bit before regrouping to talk some more. 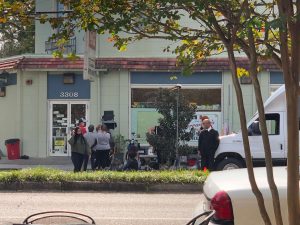 I couldn’t hear them from where I was sitting. This wasn’t the most exciting day but it was interesting enough to pass the time.

At one point all the directly relevant members of the Terranova family were out front.  I didn’t want to bother them because they were talking amongst themselves.

Whatever they were talking about seemed to be important from where I was sitting.  I’ll find out what’s going on tomorrow. 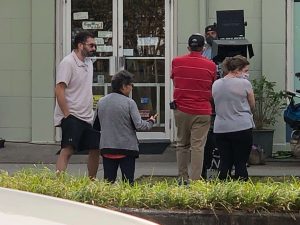 Emily was either winking at me or the sun was in her eye.  I suspected the latter and I was right.

That was then.  This is now.

Emily just asked me how I’m doing.  She thinks I’m sick because I ate more than I usually do when I visit Santa Fe.  She thinks I need to keep my strength up.  In reality, it’s because Courtney cancelled our lunch excursion previously scheduled for today.  It is always something with that Courtney.

When you visit New Orleans you should visit like you live here.

I told Emily that I am being very productive today.  I said it because I know it is hard to tell when I am frittering my time away or working for a living.  This is the nature of doing what I do for a living.  It is very hard to describe.  I live in a New Orleans state of mind.  You can, too.  I am allergic to deadlines. As a professional innkeeper, though, I am always thinking about ways to improve the La Belle Esplanade Experience (TM).  Frau Schmitt is the better half of this operation.

You never know what you’ll find when you turn a corner in New Orleans.  Ours is a city full of serendipity.  New Orleans is a city that is full of small, delightful surprises for those who take the time to notice.  Follow your nose in New Orleans.  Looking forward to a happier future will always steer you right.

La Belle Esplanade is here for you.

Good memories are made on our street every day.  I know.  I live here.

I still don’t know why the film crew is at Terranova’s Supermarket.  That is a question that will have to wait until tomorrow to be answered.