It is finally here!  Tonight is the first night of Mardi Gras.  Three parades tonight!  It is Twelfth Night in New Orleans.

The Phunny Phorty Phellows roll on St. Charles Avenue.  The Krewe de Jean d’Arc rolls in the French Quarter, mostly on Chartres Street.  There is another one but I never remember what it is.  It is new.  They used to take the streetcar on Rampart Street so I knew the route.  I don’t know where it goes now.  I don’t know anything about it.

I didn’t say anything but I made a mental note.  I never think about that third krewe.  Neither does anyone I know.

There was an article in the Times-Picayune about what is happening tonight but I didn’t read it.  I already know all I need to know about Mardi Gras. I always send people to Joan of Arc on Twelfth Night in New Orleans.  That’s a nice parade.

Alright, I couldn’t stand thinking about it anymore.  This has been driving me crazy.  Courtney and I got to talking about it and all she knows is Joan of Arc.  When it comes to things important to me, this Courtney don’t know nuttin.  She knows how I think.  I guess that’s why we are pals.  She is mysterious and strange to me, like Aperol.

Welcome to my world.

This, gentle reader, is how a day in New Orleans unfolds, not with a bang but a blossom.   It doesn’t happen only on Twelfth night but the fact that it’s Mardi Gras helps.

Eric came back later and told me that the third parade is the Funky Uptown something-or-other.  The acronym is ****.  It’s Mardi Gras.  You don’t have to be classy but it helps.  They ride in a streetcar down St. Charles Avenue five minutes after the Phunny Phorty Phellows.

Maybe that krewe I can’t think of is defunct.  I’ve never heard of these Funky Uptown pholks.

The Phunny Phorty Phellows have been around since the 1890s.  Eric knew that.  Courtney didn’t.  Every day is full of pleasant surprises.  That doesn’t really count as three parades.  That’s three krewes.  Do you really think anybody turns out just to see Krewe d’Elusion?  Of course not.  That would be nuts.  Krewe de Vieux is the main draw, Krewe d’Elusion is the afterparty.  It’s the same thing: two parades that are really one.  It’s a lot like life.

I don’t know where the other Eric is.  This Eric says that the right Eric is putting things away.  I have an inkling what that means but choose to not pursue it any further.

It is easy to find a good dentist in New Orleans.  Big Easy indeed. There is no point in going into why I just wrote that.  Someone was needing a dentist and found one.  It’s too complicated to take the time to explain.  Who cares?  It is Twelfth Night in New Orleans.  Everything always works out.

Eric and Courtney are talking.  When she was typing it was listening to cicadas.  Now, the two of them, are talking in full jaunty bartender mode.  I enjoy my days being tranquil.  Who doesn’t?

It is hard to focus in New Orleans.  Every day is a dazzle of details.  Sensory overload.  “It’s a lot of effort to give everybody a good time.” Courtney just said that to Eric.  I wasn’t eavesdropping.  I don’t always listen but I do hear.  Now I am sharing it out in public.  Courtney knows what she knows.  Courtney knows a lot.  Maybe that’s why we’re pals.  Maybe she is a figment of my imagination.  I live a city where dreams come true.  It could happen to you.

Eric loves it when the guy in the corner comes in.  He keeps to himself and is predictable.  Neither of us know the guy’s name.  He doesn’t talk much.  He just sits and reads the newspaper while he eats lunch.  He is my opposite.  He dresses like a crazy person.   Like I say, he and I are opposites.

The mailman just came in.  We wished each other a happy Mardi Gras.  It is Twelfth Night in New Orleans.  Everything is good, even with the headache Courtney is giving me.  I guess that’s why we’re pals.  It is another beautiful New Orleans day.  Laissez les bon temps rouler!  When you love where you live, you love life.

I have no interest in football but I love Twelfth Night.  It’s Mardi Gras!  We can talk about that.

It is early in the season so nothing is decorated yet.  It is the twelfth night of Christmas, after all, too early to take down Christmas decorations.  After today?  Yes.  There will be no hint of Yuletide after tomorrow.  Today looks like Twelfth Night but the spirit of Mardi Gras is in the air.  I love Mardi Gras.  You will too.  Courtney told me I don’t need a comma before too. I cannot think of anymore sentences to write that will end in too.  It wouldn’t make any sense.  Much like trying to explain Twelfth Night to somebody who isn’t here.

Someone has to try.  That’s my job.  Welcome to my world.  You should visit.  It is very nice.  It is New Orleans.  You belong here, if not for Twelfth Night then for any night.  Nobody ever says their visit is too short.  I know.  I live here.  I do this for a living.  Come see for yourself.

New Orleans is always at its finest but, on Twelfth Night, it starts to get even finer.  It is Mardi Gras Day itself when New Orleans is at its most finest.

This is the first night we eat king cake and, until after Mardi Gras day, especially if you work in an office in New Orleans, you’ll eat king cake every day.  It’s a tradition.

It looks like rain.  I was Uptown earlier today for no good reason and I was  caught in the rain.  I was miserable. At least it wasn’t too cold.  It is Twelfth Night in New Orleans.  Mardi Gras!

I spend most of my time in Mid-City.  The sun usually shines wherever I find myself.  Mardi Gras starts today!  I feel better already.  It’s about time.

This is what Twelfth Night is like in New Orleans:  It is like any other day, only better.  Welcome to my world.  This is why La Belle Esplanade is here.  Good memories are made at La Belle Esplanade every day.  I know.  I live here.  It can happen to you, even if only for a short while.  Visit like you belong.

Get ready to be sprinkled with Mardi Gras dust.  It starts today.  It is Twelfth Night in New Orleans tonight and it is good.  It always gets better.

The spirit of Mardi Gras lingers throughout the year.  Tonight is the night that it starts to build up steam.  You belong here.  Five nights is a good amount of time to get a satisfying flavor of the city.  After five nights in New Orleans, that’s when you realize you have barely scratched the surface of this wonderful enigma of a city that Frau Schmitt and I call home.

Frau Schmitt is the better half of this operation.  She says the same things about New Orleans as I do.  There are many facets to this jewel of a place.  It twinkles.

You’ll never know who you’ll meet when you turn a corner in New Orleans. 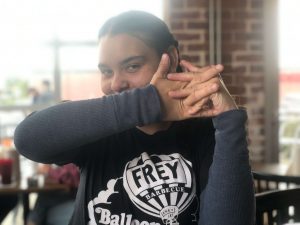 That isn’t a photo of Courtney.  It is some random photo I found on my phone.  I know the subject but she is no Madonna.  She is very nice nonetheless.  Courtney is different.  Courtney is like Twelfth Night in New Orleans.  A full Mardi Gras Day’s dose of Courtney would be too much.  Twelfth Night is just right.  You heard it here first.

The guy in the corner’s name is Earl.