I had lunch at II Tony’s the other day, home of char grilled seafood and Creole Italian.  Ever cuisine gets creolized over time in New Orleans.  That’s what makes it New Orleans cuisine.  It’s been a while since I had been here.  The time before that was with Jimmy. 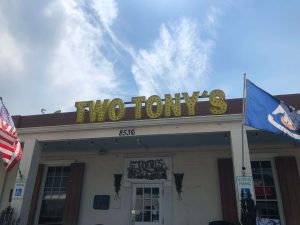 This is true New Orleans neighborhood Creole Italian at its best.  It’s in Lakeview, on Pontchartrain Boulevard.  This is in the West End, a part of New Orleans few people from Uptown or the East, or, really, any other neighborhood besides Lakeview, ever visits.

This stretch of Pontchartrain Boulevard is a small collection of restaurants that are nostalgic reminders of when the West End was a honkytonk paradise at the end of the streetcar line.

II Tony’s is no honkytonk.  I was the youngest patron in there until some fifth graders from Holy Cross School showed up with their mothers.

If I told you how I learned that they all go to Holy Cross, I would be telling you a long story that probably won’t interest, and, it will be even longer and more confusing because I will have to explain a whole lot of New Orleans things that came up in the conversation.  Let me just say that it was delightful the way in which the hostess and I learned why these boys were all wearing matching caps.

II Tony’s feels like a place where a person can belong.  It is obvious to the staff and it is obvious to everyone who walks in the door, either for the first time or the hundreth.

When I say that II Tony’s is Creole Italian, that means there is a lot of seafood on the menu.  That is one reason Jimmy liked to come here.

People meet each other for lunch at II Tony’s.  Some people come all at once as a single party but most tables are populated by parties that arrive piecemeal.  An older gentleman in a suit will walk in and the hostess will ask how many.  If he is the first of a party of four, he gets seated first to make sure that table gets claimed.  “I think we’re going to run out of tables,” the hostess says.

The local American Legion chapter was meeting in the back room the day I was there.  They are about twenty guys, many with their wives.  They all know Regina and Regina knows them because the American Legion has been having lunch her for years and years.

Regina is one of the waitresses.

WHAT IS CREOLE ITALIAN?

Here are a few examples:

The redfish is fresh today.  It be had lightly fried or grilled for $21.95.  That is served with the soup of the day or a dinner salad, and, the choice of one side.  The soup of the day that day was eggplant tomato bisque.  The sides available are potato salad, fettuccini alfredo, French fries, capellini marinara, capellini aglio olio, sautéed vegetables, or sweet potato fries.  For an extra $2.50 you can order the redfish sautéed or blackened.  For an additional $7.95 you can add lump crab meat tossed in lemon butter sauce to the top of your dish OR the chef’s sauce of the day which is, no doubt, a rich concoction of seafood, trinity, and cream.

Trinity is onion, bell pepper, and celery.  The trinity forms the basis of most Creole cuisine, including Creole Italian, which, as noted, II Tony’s is totally Creole Italian.  The restaurant looks it.  It feels it.  The menu reflect is with a shrimp remoulade salad and crabmeat stuffed mushrooms.

I had the shrimp remoulade salad.  I usually eat like a bird but the remoulade was such a pleasant surprise that I ate everything on the plate.

As I sat satisfied with my empty plate, I got the decadent idea that I should treat myself to a full II Tony’s meal.

The story of the rest of my meal will have to wait for another day.  The doorbell just rang.  New guests are checking in for the weekend and guests come before blog posts.  Taking care of guests takes priority over anything else that may happen during my day.  That’s why La Belle Esplanade has the reputation for excellence that we do.   You should read our reviews.

When you are ready to discover some neighborhoods off the usual tourist radar, and some restaurants that aren’t in the guidebooks, I know where you should stay.  You should visit New Orleans like you belong here.  That’s what La Belle Esplanade is here for.

Here is a link to the rest of the story.