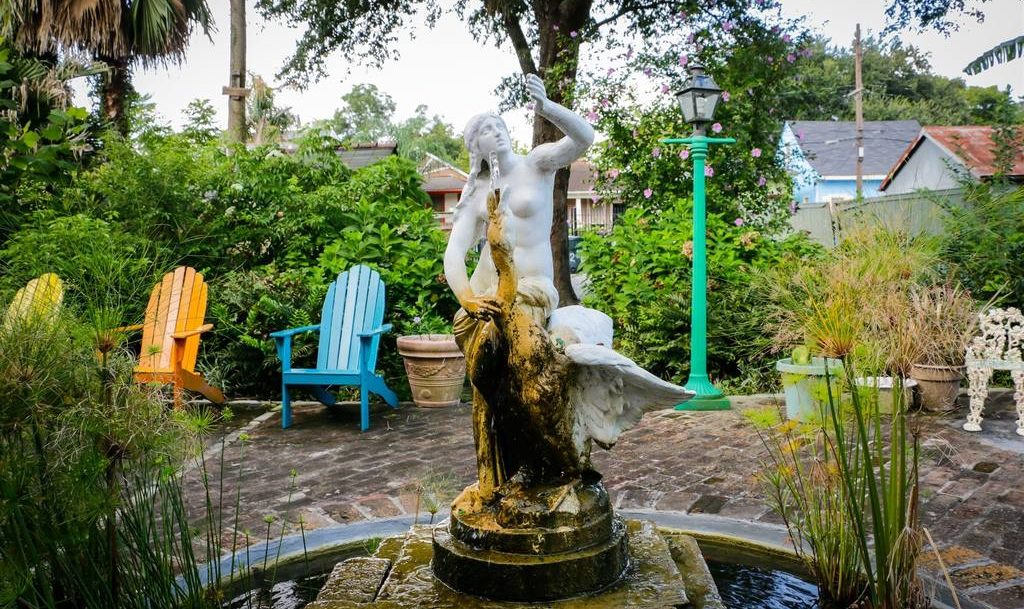 Something is wrong with the blogging software so I’ll have to proceed sans illustrations—that means without.   This is no great loss, considering my photography skills.

Not here though.  We run a clean inn and we like to provide fresh blog content on a regular basis whether or not our past and future guests find it useful.  That’s how we roll on Esplanade Avenue.

Rather than wait until Day 17 of no new installments, let us soldier on together without the usual bells and whistles that illustrations bring to the table—

JINXED BY VOODOO IN NEW ORLEANS

Why hasn’t the blog been updated for 16 days?  It’s because of an unfortunate turn of events that may or may not be circumstantial and accidental.  You see, your humble narrator has been in two minor motor scooter accidents twice this past week.

The first one was on North Dorgenois Street, at the Esplanade Avenue intersection.  Don’t ask me what happened.  One second, I was gently applying the breaks while approaching a stop sign.  The next second, I was on the ground with my trusty motor scooter on top of me and abrasions on my left foot, right 1st finger knuckle, and blood running out of my left elbow.  Frau Schmitt took me to the urgent care clinic on N. Carrollton Avenue where I got 5 stitches in my elbow.  Said the doctor, “I can see the bone.  I’m going to put some stitches there.”  He didn’t say which bone.  It didn’t feel like my funny bone.

The very next day, on the same scooter (remember, I just called it trusty), I was following Frau Schmitt on Ursulines Avenue three blocks upriver from Esplanade Avenue.  I went over a bump in the road that I go over every day.  The handlebars started to shake until they shook out of control and down I went.  It wasn’t a straight shot, either.  The road took a bit of my skin from me as I slid under the scoot.  New abrasions: left thigh and right forearm.  Another trip to the very same urgent care clinic.  They weren’t expecting to see me again so soon.  No new stitches, though.  We all yukked it up as the doctor dressed my fresh wounds.

My limbs are wrapped with bandages and I walk with a limp.  I bear it all with dignity, as one might expect.

I’m convinced my trusty motor scooter has been jinxed.  If you think like me, I guess that means we’re both right.

I went to where my scooter is usually parked next to our house and I found a very interesting piece of evidence that my hunch is correct.  In the alleyway between the orange house (2216 Esplanade Avenue, La Belle Esplanade) and the blue house (2212 Esplanade Avenue, the home of our esteemed neighbor) I found a dried chicken foot that had been painted black.  I sincerely doubt a chicken just accidentally dropped its black-painted foot right where I park my scooter.  I think it was planted with malevolent intent.  I suspect voodoo—of the worst kind.

I know what you’re thinking.  You’re thinking “Who would jinx our humble narrator with a black chicken foot?”  I have to admit, I have no idea.  Believe me when I tell you, I’ve given this matter a lot of thought.  Like Boston Blackie, I am the enemy only of those who make me an enemy and I am a friend to those who have no friends. I’m quite a guy.

I don’t have any enemies that I know of in New Orleans.  I asked Frau Schmitt if she could think of anyone who would want to lay a jinx down on my scooter.  “Everybody likes you,” she said.  “I can’t imagine anyone wishing something bad would happen to you.”  Frau Schmitt is usually right about these things.

The proof was there in the alleyway, though, a dried out chicken claw painted black.  How long it had been there, I can’t say.  It wasn’t there last Monday.  I know that because I had dropped a shiny penny in that very same spot on Monday and I didn’t see the chicken foot when I stooped to pick up the penny, which was heads-up, naturally.

The nearest I can figure, maybe the jinx was meant for my evil doppleganger, Whettam Gnik, but the last time I saw him he was frozen in an Antarctic ice floe.  That’s a story for another day, however.  We don’t have space for it here.  Maybe he escaped his icy prison somehow.  Maybe he escaped alive.

Whettam Gnik never had any friends that I know of, except for myself, his good twin.  Remember, I am the friend of those who have no friends.  Whettam Gnik always was a handsome man.  It is not inconceivable that I was mistaken for my doppleganger and someone put a jinx on me in a case of false identification.  These things happen.

I hope that’s the case.

If my supposed enemy reads this blog, please be aware that the author, Matthew King, a respected New Orleans innkeeper, and a pillar of civil society, is not Whettam Gnik, that scoundrel who cheated you out of your inheritance twenty years ago by marrying your widowed mother and hiring a crooked lawyer and throwing you off a bridge.  That was him, not me.  You’ve jinxed the wrong man’s scooter.

Anyhow, I’m on the mend now and regular updates should resume their usual schedule of two to three times a week.  Thank you to our regular readers who have been inundating us with email missives worrying about my whereabouts.  Thanks, as always, to Frau Schmitt, the better half of this operation, for acting as my nurse while keeping everything running smoothly at our boutique New Orleans inn located at 2216 Esplanade Avenue.  Good memories are made on our street.

Tune in next time when I will hopefully be able to provide some pictures to accompany the usual scintillating text.  I’ve got a rough draft of the next installment which is about a bar that you’ve only seen in dreams.  It’s a historic New Orleans bar located in a place where you might least expect it.  You never know what you’ll find when you turn a corner in New Orleans.  You may find yourself flat on your back with a motor scooter on top of you!  Actually, you won’t.  If you’re just visiting, you’ll more likely be getting around on foot, or by bus, or by Uber.

Until next time,
À votre santé,
La Belle Esplanade
…where every morning is a curated breakfast salon.