It only looks like an Edward Hopper painting.  This is my life in New Orleans. 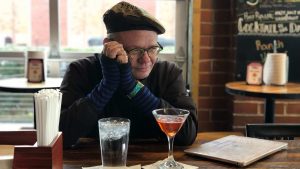 A woman can be any age, from girl to crone, and, whatever age she is, she always looks better when she sports a black beret.  Prove me wrong.  You can’t.

Nanette is 72 years old.  She is wearing a black cashmere sweater and black tights.  Her skirt is red tartan plaid, as is her scarf.  Her wool jacket is black, as is her woolen beret.  The beret is oversized, jaunty, relaxed.  Nanette is here with her father.  I have never had the nerve to introduce myself to the father.

Nanette’s shoes are the same color as the Pope’s: red.  It isn’t unusual to see red shoes in New Orleans.  Most people have at least one pair for occasions when one needs to wear red shoes.  It happens more often here than you think.  It’s a thing.  People in New Orleans buy new shoes in a different color every year.  Most of them are made in Italy.

Nanette just changed her seat so that she can watch the door.

There are two rock stars at the bar.  One of them is like all Stevie Ray Van Zandt and the other guy is like a worm who is probably his manager.  Stevie Ray is a loudmouth.  The wormy guy, he looks like the Undertaker’s manager, he doesn’t say much I can hear but I can hear that he chuckles like Peter Lorre.

It’s a weird scene today, I can tell you that.

A lady is eating nothing but cornbread and diet Coke for lunch.  She looks to be having lunch with her father, too, just like Nanette.  I can’t tell what the cornbread lady’s father is eating but I can tell you it isn’t worth me putting on my eyeglasses to find out.  We are at Frey Smoked Meat Company.  It is some kind of barbecue something or other.  I’m sure it’s great.

Now someone else showed up.  She has the manner of a doormouse.  She keeps her mask on between sips of beer.

The rock stars are not really rock stars, appearances notwithstanding.  Stevie Ray’s hat is ridiculous.  They’re both out of central casting.  They are not rock stars but they are race track people.  That explains it.  Professional gamblers.  I don’t usually run into their type so deep in Mid-City New Orleans.  They tend to congregate closer to the race track.

The doormouse and I are getting along famously.  We are both cold.  She is eating pork belly poppers, which, to my eye, are cubes of fat covered with pepper jelly glaze.  No one will let me order pork belly.  Not at Frey, not at Blue Oak, not at Toups’, not at anyplace.  Everyone says the same thing: “It’s not for you, Mr. King.  You are going to hate it.”

I trust my advisors.

Nanette wears a wig.  It isn’t obvious from afar but I was just talking to her up close and it is obvious up close.  I wonder what she looks like under that rug.  She knows how to rock a black beret. Nanette is no inegnue.  She is better that.  She is very well put together.

Nanette likes the seats two rows in front of my favorite two seats.  That’s how we met. Familiarity breeds respect.

The other lady seems to really be on a cornbread diet.  Maybe it’s a fad.  I don’t know but I do know I’ll be keeping my eyes open to see if a trend is developing.

The rock stars are off to the track.  The races start soon.  They carry thick wads of bills in their pockets.  They must know what they are doing.  The one of them is loud enough for the both of them.  The other one is just creepy.  Paul Bearer was a gimmick for Bill Moody.  These guys don’t have a gimmick.  This is their life.  Nice work if you can get it.

The guy with the stupid hat would have been better off if he was wearing a black beret.  He would look less a buffoon.  In fact, this joker would look best in a red beret but he doesn’t let his mojo roll that way.  Everyone has their foibles.

It takes a special kind of person to be able to make a living as a profesional gambler.  That’s not the life for me.  I like the life that I’ve got.  I should.  Look at where I live.  I get to have lunch with you every day.

Welcome to my world.

I live both an uneventful and endlessly interesting life.  I live in New Orleans, America’s Most Interesting City!  I appreciate the opportunity to write you letters from New Orleans over lunch.

Subscribe and I will do it at least five times a week, more likely six.  I’m only going to commit to five.  $80 a year.  What?  That’s too much?  It is not. It is cheaper than a vacation in this wonderful city I call home and you will know a lot more than any guidebook or your friends can tell you.  Welcome to my world.  I live in the real New Orleans.  I love where I live.  You will, too.

Sign up for the paid subscription.  It is $7.00 for a minimum of five letters a week.  We should have lunch together as often as possible.  Something interesting happens in my part of New Orleans every day.  There are angels in the details.

If you opt for the free subscription, you’ll be marginally up to speed but you won’t be embedded in the New Orleans state of mind, where I live, in the real  New Orleans, in the round.

Welcome to my world.  If you want to learn more about what I encounter every day, you are in the right place.  Subscribe today.  There is plenty more where this comes from every day.

It is very good to see you.  Welcome to my world.  Life is a parade in a cabaret.  Every day is worth writing down.  This blog is going to be updated regularly but less so and more focused than it has been recently.  The good stuff is moving elsewhere, to Substack.  Check out what you’ve been missing.  It will be nice to have you back.

It will be nice to have lunch with you.