The only reason I am at Superior Seafood is because Sophia is working.  I phoned ahead to make sure.

There is nothing on the menu that interests me.  I have been here before and found the food mediocre.  I would think that.  Superior Seafood is owned by the same people who own Superior Grill.

When we had first moved to New Orleans our neighobor in the apartment on the downtown side of our building told us that the best Mexican food in the city was, at that time, at Superior Grill.  He may have been right.  It was only five years after Katrina.  We went.  It was mediocre.

We went to Superior Grill a few years later and nothing had changed.

My former doctor’s office was on the next block from Superior Grill so I would pop in to sit at the bar until it was time for my appointment.  I never ate there except twice.  All the food there comes covered with shredded cheese.

The people sitting next to me right now, at Superior Seafood, ordered fried alligator and a cheeseburger.  It just got delivered and there is no shredded cheese in sight.

After spending a long time studying the menu while making my way through today’s edition of the Wall Street Journal and conversations with Sophia, I still have no idea what to order.  I am totally disinterested in my surroundings, except for Sophia.  The vibe at Superior Seafood is a total tourist trap pretending not to be.  The ambience at Superior Seafood is as authentic as the mint flavor in a toothpaste tube.  It’s nice enough for what it is.

My review of the menu didn’t include reading the upper left corner.  Superior Seafood has oysters.

There is a thing on the oyster menu called Oysters Superior.  That’s what Superior Seafood calls two each of Oysters Bienville, Rockefeller, and char-grilled.  Sophia told me.  Sophia also told me I can all Rockefeller if I want, which I do.

I dislike char-grilled oysters and I only eat Oysters Bienneville at Pascal’s Manale.

There are only so many oysters a man can eat in one day.  I am not a character in a Joseph Mitchell profile.  I have time to decide if a want a half dozen oysters or more.

A quick survey of The Porch reveals that the most popular lunchtime drinks are, in order of prevelence, sweet tea, water, beer, and one person has ordered a Sazerac.

The TV screens showing ESPN2 have been frozen on a baseball game the whole time I have been here.  The picture hasn’t moved once.  There are three frozen TVs that I can see from where I sit.  The basketball channel seems to be working fine on the three other TVs in my sightline and there is one dead TV that is on but blank.  The blank TV is the one directly in front of me.  It’s like the first sentence in Neuromancer.

I didn’t come to Superior Seafood to watch TV so the dead television doesn’t bother me.

The students at Sacred Heart Academy have gone back to their classes.  The playground is empty.

People from St. Bernard Parish swear by the superiority of their oysters.  Just ask them.  I have to agree.  I think Cassamento’s oyster beds are in Area 3.

I am not an oyster connoisseur but I am not expecting to be overawed by these Area 15 oysters, no offense to the good people of Terrebone Parish.  I ordered a dozen.

Guess what song just finish playing.  It’s Madonna’s “Like a Virgin,” fresh from 1984.

Guess what song is playing now.  It’s “Heart of Glass,” by Blondie.

I hope the oysters at Superior Seafood are fresher than the soundtrack.

Now we sit and wait.

The guy sitting in front of me has finished his meal.  I didn’t see what he ate.  His plate is spotless.

I am in no rush, I’m occupied by the Wall Street Journal, but the oysters didn’t take long.  It’s not like they had to cook them.

These Area 15 oysters are delicious.  They are better than Area 10 oysters but not as good as Area 3.  I told Sophia to tell the shucker that he did an excellent job. Every shell is full of liquor.  They really are quite delicisous.  I am using a warm loaf of French bread to soak up the liquor.  Don’t waste a drop.

The best part about Superior Seafood is that when you open the frosted glass door to the “toilettes” there is a 6’ x 4’ painting of a pelican smoking a cigarette.  It is in the vestibule between the doors for men and women so that everyone using the restroom can see it.  It’s a real work of art. 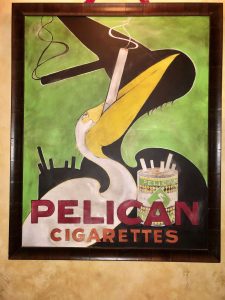 Two hours have passed since I first arrived.

I am toying with the idea of ordering escargot but Sophia tells me the snails aren’t fresh.  Sophia says that I am the second person to ask her that since has worked at Superior Seafood.  I decide against it.

Two leisurely hours at Superior Seafood is enough for one day.  I’ll take the check.

Sophia tells me to take my time.  She needn’t tell me.  Taking my time tends to be my way.  Sophia knows that.  We go way back, from before she worked at Superior Seafood.

It was nice to see Sophia today.

When it is time for you to visit New Orleans, you now where to stay.  You are the right website: LaBelleEsplanade.com.