I’m not going to spend a lot of time talking about oysters with caviar beyond mentioning that I had a dozen for lunch.  They were delicious.  I was at the Bourbon House, in the French Quarter.  That’s where I go when I get a hankering for a decadent lunch.  I didn’t linger overlong.  I am back in Mid-City as I write this, where I belong.  It’s a beautiful day.  There isn’t a clue in the sky of what today will bring.  Let’s see:

A pelican just flew by.  Every day isn’t oysters with caviar, that would be too much of a good thing, but every day is full of good things.  Variety is the spice of life.  Ariadne is pregnant.  There is nothing more beautiful in the world than a mother.

I very rarely leave Orleans Parish (which is co-terminus with the City of New Orleans), so I have only the vaguest idea of what the rest of Louisiana is like.  I live on the Île d’Orléans.

Chase is involved in some real estate deal in LaPlace.  All I can tell you about LaPlace is that it’s out there.  I think it’s on the other side of the river.  I think I drove through once on the way to nowhere.  I vaguely remember there was a McDonald’s.  LaPlace is not the kind of place to go searching for oysters with caviar.  That’s why I stick to New Orleans. 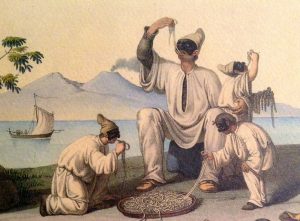 I hear Ariadne is pregnant.  Someone told me the other day.  I have not had a chance to confirm it with her.  She has a very buoyant personality.  I think she’s both nuts and not nuts, if you know what I mean.  I like Ariadne.  She is on to something.  She wants to talk to me about being a rapper.  I am all in on this collaboration.  Most probably nothing will come of it but it is the dreamers and the strivers that make the world interesting.  No one every got rich by being self-conscious.  Look at what happened to Sylvia Plath.

Look at what happened to Princess Shaw.

When you order oysters with caviar at the Bourbon House, the oysters come raw on the half shell with a bit of Louisiana caviar (the world’s finest!) and a thimbleful garnish of chopped vegetables pickled in white wine.  They are a worth a trip to the French Quarter, if you happen to find yourself in New Orleans.

It was quiet on Bourbon Street today.  It was quiet throughout the whole French Quarter.  It was eerily quiet, requiring only a skeleton crew.  There were plenty of oysters with caviar for everyone.  There will be plenty for you when you get here, too.

I know where you should stay.