When you think about winter in New Orleans, you probably imagine Mardi Gras and its grand parades and celebrations. Did you know that another fun event happens right after that? St. Paddy’s Day in New Orleans is a fun way to ease into spring and celebrate once more before Lent comes around. Read on to learn what parades to see, which pubs to visit, and where to catch great live shows.

Here’s What You Need to Know Before Attending St. Paddy’s Day in New Orleans

Are There Any Parades to See?

St. Paddy’s Day, also known as St. Patrick’s Day, is celebrated on March 17th every year. For the occasion (and because it’s New Orleans) you can attend several marvelous parades. Take a look at some of the most popular below and choose your favorites:

Around St. Patrick’s Day, there is always a reason to celebrate.  This is New Orleans, after all.  You’ll find some luck of the Irish wherever you go.

What About Live Music on St. Paddy’s Day?

In addition to the parades, St. Patrick’s Day in New Orleans is known for its extravagant and lavish block parties. Imagine traditional and upbeat Irish music pumping, delicious food sizzling, and local libations flowing. Block parties usually start at 10 a.m., so if you have a certain bar or borough in mind, make sure you get there early.

Where Are the Good Pubs?

What would St. Paddy’s Day be without visiting an Irish pub? Lucky for you, we have a few right here in New Orleans. Finn McCool’s might be the most popular. This traditional neighborhood pub is named after the mythical giant that created the Giant’s Causeway. The pub regularly hosts live entertainment, soccer games, and, of course, Irish dancing. Mick’s is one of our favorites, and close to La Belle Esplanade. This Irish dive bar is a fun spot for locals and has wonderful drinks. They even serve them in plastic cups so you can take them around as you explore St. Patrick’s Day celebrations.

Now, Let’s Find You a Place to Stay 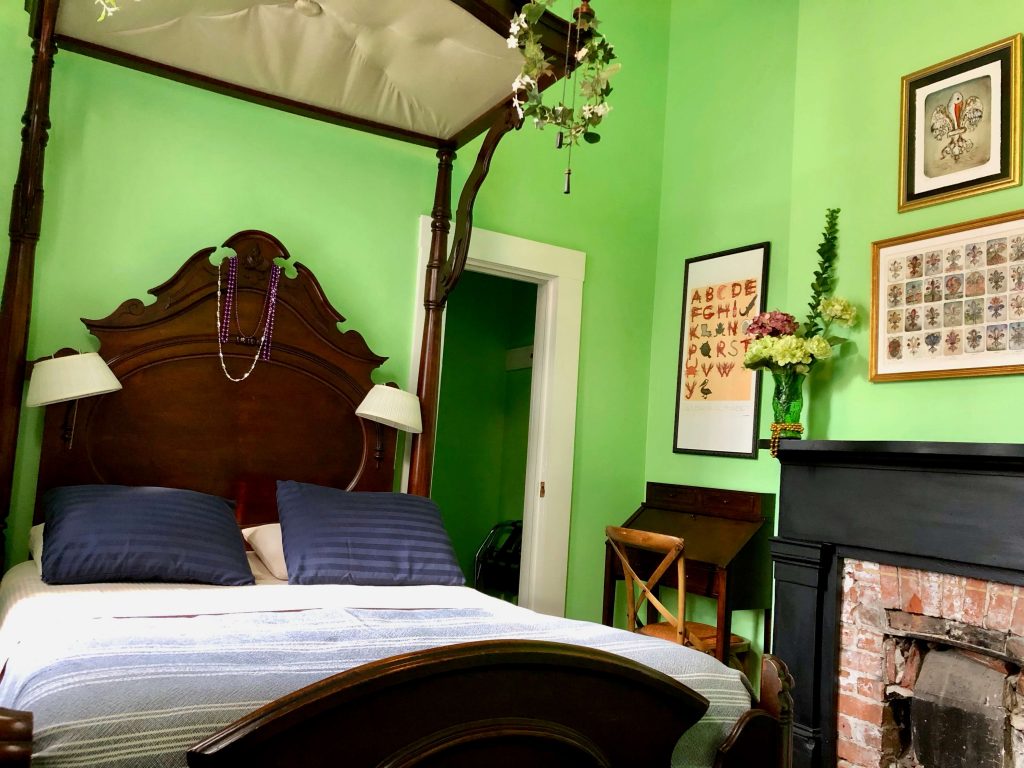 Maintain your celebratory mood when you stay in our Pelican Suite. Its green walls will go nicely with the Irish spirit of St. Patrick’s Day. This second-floor suite is located at the rear of La Belle Esplanade and offers plenty of privacy. You’ll love sipping on a cup of coffee (or tea) on the balcony or soaking in the antique claw-foot tub after celebrating. A delicious New Orleans breakfast and complimentary drinks are included with your room, so what are you waiting for? La Belle Esplanade awaits you this spring.  We are close to the action but far enough away so that you can get a good night’s sleep in an authentic local neighborhood.

[Editor’s Note: A tip of our fedora to WildChild504 who sent us this post in draft form via our Facebook page.  La Belle Esplanade has 13,000 Facebook followers.  Your humble editor posts two, three, four times a day about things he encounters over the course of a day.  Follow us on Facebook to keep yourself in an authentic New Orleans state of mind.]