I’ll never forget that time the horse got so drunk it had to be escorted out of Liuzza’s-by-the-Track.  That was one drunk horse.

You know Liuzza’s-by-the-Track.  It’s the bar on Ponce de Leon Street.  They have the best everyday gumbo in the city.

As I remember it, Jimmy was against letting the horse into the bar but he was a friend of the bald guy with the white beard and the bald guy was good friends with the horse.  I could tell you the bald guy’s name but I don’t want his wife to read this and find out her husband has been palling around with a horse.  I don’t think she knows and I am not going to be the one to tell her.

That horse had been everywhere, even to Saratoga Springs. 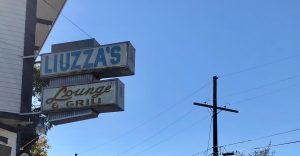 The bald guy and Jimmy had a long mutual history.  Money wasn’t involved.  Whenever the bald guy called in a favor, Jimmy, who was well known for having a soft spot for the dim-witted, always relented.  Jimmy was a shrewd businessman.  Jimmy knew a horse can drink six times the tab of a man.  A horse doesn’t have pockets but his bald friend does.

Well, these two jokers certainly overstayed their welcome.  They emptied two kegs of beer and all of the whiskey.  The horse was really yukking it up.  He couldn’t hold his liquor.  They got loud.  They got obnoxious.  It was when the horse started kicking over tables that Jimmy finally had enough.  These shenanigans were bad for business.  Even Widow McGurty was starting to complain.

There is nothing worse than a drunken horse but if you talk sense to them they will listen and agree to be escorted out quietly.  That is what happened in this case.

The horse hasn’t shown up at Liuzza’s-by-the-Track since then.  It is just as well since he is banned from the establishment.  I’m sure Theresa told the nephew all about it.  What other kind of behavior would you expect from a gelding?  The bald guy with the white beard still shows up.  That guy will talk to anybody.

The horse’s name was Winsome Biscuit.  The last I heard, he ended up as dog food and glue.

You never know what you’ll find when you turn a corner in New Orleans.  It’s no wonder that we love where we live.  You will, too.  Visit New Orleans like you mean it.  You belong at La Belle Esplanade.  We’re here for you.